Is it possible to convert itunes audiobooks to mp3 format?

If it does not belong anywhere else and has to do with iPad post it here.

Slammerkin
Mar 23rd, 2016, 12:26 am
#3397168 by Slammerkin
Short Version:
Is it possible to convert an itunes audiobook to mp3 format, simply? Without spending a ton of money on some kind of converter?


Long, Rambling Version:
I have an Android device (a Samsung Galaxy Tablet), and a laptop running Windows 10. No apple/Mac/i-anything.
I work nights, driving- 7 days a week. Audiobooks are basically what gets my rump out of bed and into the car. Caveat being, there are about a half dozen or so audiobooks that are only available in the UK, that I'm dying to get my hands on.

I'm an Audible US member, and I even tried to sign up for an Audible UK membership, using a (legit) address in London, but when I tried to purchase a couple audiobooks, it wouldn't let me go through. Tried using a proxy, but nothing I tried worked. It recognizes that my payment method is a US based card. Audible doesn't have gift cards, per say, so I can't buy one from the UK store to use, either.

Someone told me that you can, however, buy gift cards for itunes, and that it's relatively simple to set up a UK account from the US, and use the gift cards to shop there. But I don't have anything that would play itunes file formats, hence the need for a conversion to mp3.

I'm desperate to get these books- I've already established with Audible US that they are not a planned release for our region (some are older, some are part's 2 or 3 of a series that the US only released part one of. If it was a matter of patience, I'd just hold out, but it's not likely to happen. I would gladly pay for these audiobooks (I'd be thrilled to, really!), but regional DRM stuff and all...
So this is sort of my last hurrah attempt at getting them- I found people on ebay selling the itunes UK gift cards; they digitally send you the card number, and then I'd just have to create a “UK” itunes account and download the audiobooks- but then I'd need to convert them to mp3.

Whenever I try to google how to do this, I end up on one of a million semi-dodgy “converter” advert pages, offering me free trials and easy conversions and all kind of stuff I don't know if I believe.
I also found multiple threads in which people claim that:

c) you can convert some stuff, but not itunes audiobooks

I have no idea which, if any, are correct- and whenever I try to email or engage, itunes support in chat, they tell me to call them, which I refuse to waste my very limited cell phone minutes on, so I'm going nuts (who doesn't let customers email them?!)

Please, someone help me. Tell me if this is possible? Can one convert an itunes audiobook to an mp3 format, and if so, is it something someone who isn't super tech-savvy (such as me), could easily do (other than playing them in real time, and using something like audacity to record them to then convert)?

Following reading your questions, I have done some research myself to try and help. 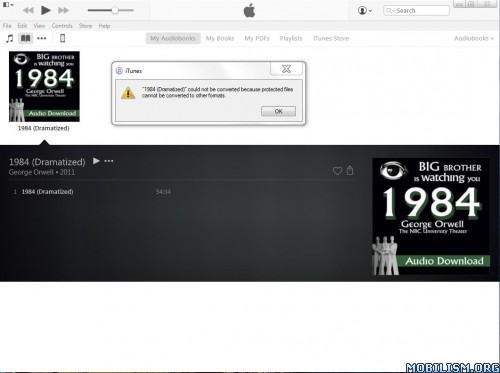 I believe that if it was not protected it could be converted to mp3 in iTunes.
(To convert an audio book to mp3 in iTunes, go to 'My audiobooks', select the file you want to convert, click file (in the top left of itunes) and scroll down to 'create new version' and then select 'create MP3 version')

My best idea for you taking all into account is to purchase an ipod touch (they're quite cheap on ebay), set up a uk account (instructions below) and buy uk gift cards from the paypal link (below)

A few tips:
1. NEVER BUY ITUNES CARDS FROM EBAY! Sadly you cant trust all of these. I would suggest using pay-pal (https://www.paypal-gifts.com/uk/)
2. The best way to set up a uk itunes account is to download a free app without having signed into iTunes (here is one: https://itunes.apple.com/gb/app/youtube/id544007664?mt=8) and when it asks to sign in you then create the account, this is because you then do not have to put in payment details when setting up the account but can add itunes card codes

Slammerkin
Mar 25th, 2016, 9:48 pm
#3403370 by Slammerkin
Thank you so much for looking into this- I think you're right about just buying the ipod touch at this point. I just hate buying something I know i"ll only use for 6 or 7 audiobooks, and then never use again, but probably better than risking money on half-cocked converters bloated with malware that might not even do the job.
I really do appreciate you taking the time, thank you so much

Crackalicious
Head of iOS
Mar 26th, 2016, 11:59 pm
#3405947 by Crackalicious
You're very welcome. Always happy to help. I can understand what your saying about buying it only being for a few things. Might be worth looking at other stuff the iPod is capable of (apps/games) to make it worthwhile

please feel free to ask for more info if you need

str8arrow
Nov 3rd, 2016, 9:30 am
#3946418 by str8arrow
Hi - I've recently found a great app which allows for conversion from mp3 to m4b and vice versa.
It's called Bigasoft Audiobook Converter.
It's a paid app but well worth it. I believe they have a free trial so you can check it out free of charge.
I like that you can choose to convert from m4b to multiple mp3's (split at the chapter markers), or to a single mp3 and conversely, you can convert multiple mp3's to an m4b (it lets you insert markers where you wish but that's a bit trickier, as I recall).
I love the app myself, Unfortunately it's not free.

If you need to convert from mp3 to m4b there IS a free app - mp3 to ipod Audiobook converter (http://www.freeipodsoftware.com/screenshot.php?n=4)