A civil war ravages the Darkness realm of Kurald Galain. The commoners' great hero Vatha Urusander vies against Lord Draconus for the hand of Mother Dark--and control over the region. But an ancient power has emerged from the long dead seas, a power that threatens to consume everything and everyone in its path.
Genre: Audiobooks > Fiction 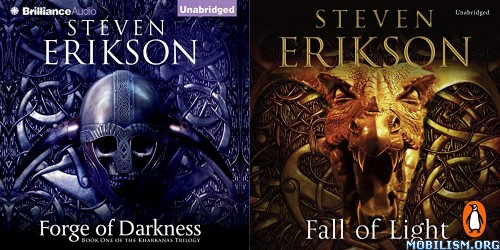 Now is the time to tell the story of an ancient realm, a tragic tale that sets the stage for all the tales yet to come and all those already told...
It's a conflicted time in Kurald Galain, the realm of Darkness, where Mother Dark reigns. But this ancient land was once home to many a power. and even death is not quite eternal. The commoners' great hero, Vatha Urusander, is being promoted by his followers to take Mother Dark's hand in marriage, but her Consort, Lord Draconus, stands in the way of such ambitions. The impending clash sends fissures throughout the realm, and as the rumors of civil war burn through the masses, an ancient power emerges from the long dead seas. Caught in the middle of it all are the First Sons of Darkness, Anomander, Andarist, and Silchas Ruin of the Purake Hold...
Steven Erikson entered the pantheon of great fantasy writers with his debut Gardens of the Moon. Now he returns with the first novel in a trilogy that takes place millennia before the events of the Malazan Book of the Fallen and introduces readers to Kurald Galain, the warren of Darkness. It is the epic story of a realm whose fate plays a crucial role in shaping the world of the Malazan Empire.

It is a bitter winter and civil war now ravages Kurald Galain, as Urusander's Legion prepares to march upon the city of Kharkanas.The rebels' only opposition lies scattered, bereft of a leader since Anomander's departure in search of his estranged brother, Andarist. The last brother remaining, Silchas Ruin, rules in Anomander's stead. He seeks to gather the Houseblades of the Highborn Noble families and resurrect the Hust Legion in the southlands, but is fast running out of time.
The officers and leaders of Urusander's Legion, led by Hunn Raal, want the Consort, Draconus, cast aside and Vatha Urusander wedded to Mother Dark, taking his place on a throne at the side of the Living Goddess. But this union will be far more than political, as a sorcerous power has claimed those opposing Mother Dark - given form by the exiled High Priestess Syntara, the Cult of Light rises in answer to Mother Dark and her Children.
Far to the west, an unlikely army has gathered, seeking an enemy without form, in a place none can find, and commanded by a Jaghut driven mad with grief. Hood's call has been heard, and the long-abandoned city of Omtose Phellack is now home to a rabble of new arrivals. From the south have come Dog-Runners and Jheck warriors. From the Western Sea strange ships have grounded upon the harsh shore, with blue-skinned strangers arriving to offer Hood their swords. And from the North, down from mountain fastnesses and isolated valleys, Toblakai arrive, day and night, to pledge themselves to Hood's impossible war. Soon, all will set forth - or not at all - under the banners of the living. Soon, weapons will be drawn, with Death itself the enemy.
Beneath the chaos of such events, and spanning the realm and those countless other realms hidden behind its veil, magic now bleeds into the world. Unconstrained, mysterious and savage, the power that is the lifeblood of the Azathanai, K'rul, runs loose and wild. Following its scent, seeking the places of wounding where the sorcery rushes forth, entities both new and ancient are gathering. And they are eager to feed.
Comprehending the terrible risk of his gift of blood, a weakened, dying K'rul sets out, in the company of a lone guardian, to bring order to this newborn sorcery - alas, his choice of potential allies is suspect. In the name of order, K'rul seeks its greatest avowed enemy.