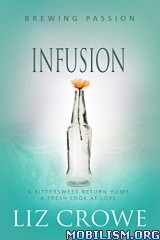 Tapped (#1): A hot hook-up in a cold beer cooler changes everything… When wealthy brewery owner Austin Fitzgerald meets sexy saleswoman Evelyn Benedict, angry sparks fly. They seem destined to clash, until a hot hook-up in a cold beer cooler changes everything. For Austin, it's a life-altering moment that sets him on a path away from his birthright, while Evelyn must face her fears about committing to a man considered the playboy of the micro-brewing world. The power of preconceived notions nearly tears them apart—until they meet up with brew master Ross, who opens their eyes to a deeper, even more erotic connection. But three strong personalities don’t always make for the best emotional mix and when a simple misunderstanding causes chaos, it’s up to Ross to repair the tattered shreds of their relationship.

Conditioned (#3): A chance meeting. An improbable connection. An exquisite attraction. Trent Hettinger’s turbulent formative years transformed him into a cynic—and into a man who realized he required something outside himself to control his temper. Something he found as a Dom—at least for a while. But he allowed himself to trust a woman once and was slapped back into reality with a vengeance and now devotes all his energy into building his real estate empire, raising his teenaged daughter…and avoiding anything resembling authentic attachments. Melody Rodriguez kept her head down for years—working hard, making her own money, trying to get ahead with every deck stacked against her. She’s determined to move beyond the ugliness that haunts her without anyone’s help. When a mutual friend sets her up with Trent, she’s determined to have some fun with him and move on. A man with nothing left to lose. A woman hiding behind her past. When two lives spent in emotional denial collide, it’s a perfect match—at least on the surface. But neither Trent or Melody are prepared for the full force of their true feelings, once fate intervenes and blows a cold breeze into their white-hot relationship.

Gayle Connolly’s dream life on the West Coast is snatched from her in the blink of an eye, forcing her to face her own worst fear—because she didn’t truly appreciate what she had, a senseless tragedy was somehow her fault. Now, she wakes up every single morning in her childhood bedroom in Michigan and wonders how she can even breathe, much less live a life devoid of everyone she loved.

Noah Stokes’ dream of taking over his family’s landscaping business is dashed when the company goes bankrupt, thanks to his father’s gambling debts. That hard reality sends him spiraling downward, where he discovers himself making money in ways he’s ashamed to admit. When he leaves it all behind and returns home to Michigan, he’s determined to regain some semblance of normalcy, not to mention his dignity.

For a while, Gayle and Noah’s smoking hot connection provides them both with distraction and solace. Until lust turns into something more—something they both resist for as long as they possibly can.