I Was Never Yours, Mr.CEO by Madhumitha Lakshmanan (.ePUB)

oldtart26
eBook Moderator
Mar 16th, 2018, 9:41 am
#5338218 by oldtart26
I Was Never Yours, Mr.CEO: Two wrongs don't make a right. by Madhumitha Lakshmanan
Requirements: ePUB Reader, 445 kB
Overview: "You aren't playing fair," I said, and my breathing hitched. I wanted to stop him but his long, tempting fingers danced erotically over my skin.
"I play to win baby."
She was fire, he was ice. She burns him with her gaze. He makes her shudder with his mere touch. She was a sweet spasm. He was a cruising pain. He was all about Wrath and Money. She was all about Passion and Love. When fire and ice meet, will they smother, or ignite into a blazing fire?
Arjun, the CEO of India's largest textile group, the most powerful man in town, held all of it. Fame, money, and models who boundlessly bestowed themselves, were something he had in copious amounts but never got bored of. All of it multiplied especially when the news of his divorce broke. He was arrogant but captivatingly handsome. All he cared about was himself and a satisfying fuck for his nights.
Maya was delicate, young and intelligent. She was endowed with beauty. Following the footsteps of her adopted parents, she turned out to be a successful Chartered Accountant. She was that happy bride in her marriage but not for long. It all just mounted up when her husband, whom she loved the most, demanded a divorce. But, she redeemed herself. She was not going to let her heart flicker for she lost all the trust she had on love. She transformed into a tough and a feisty woman. But most importantly, she was now the ex-wife of Arjun as well.
But, why did they get divorced? Was there something that was still stored away that blew their marriage out?
What will happen when Arjun is pushed into Maya's life all over again? Will the history repeat itself, will Arjun break Maya forever?
This is a sequel to my first book I'm All Yours, but it can also be read as a stand alone.
Genre: Romantic Suspense 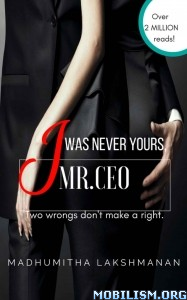