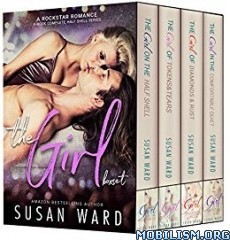 The Girl On The Half Shell
Two troubled rock stars fight for her heart. One girl afraid to love. A beautiful, raw and intense romance series that will leave you begging for more.
People think Chrissie Parker has a picture-perfect life. She leads an opulent lifestyle in Santa Barbara, her father, Jack, is a beloved music icon from the sixties, and she possesses a wealth of musical talent that will certainly lead to a promising future. But behind the façade, everything is far from perfect.
When Chrissie journeys from Santa Barbara to New York City for an audition at Juilliard, romance is the last thing on her mind. She never anticipated encountering British Superstar Alan Manzone, a musician fresh out of Rehab, tormented by his own weakness and troubled past. Alan's life is everything Chrissie's is not; exciting, glitzy, and an all-out train wreck.
Chrissie is soon consumed by Alan's shocking pursuit of her, his dark secrets, and his sexual desires. Will their stormy affair destroy them? Or will their love keep them together for a lifetime?

The Girl of Tokens and Tears
“I should never have fallen in love with Alan. He is like a drug, my secret addiction, and I am trapped in the hold of him.” ~Chrissie Parker
“When I call, you’ll come. You won’t be able to stop yourself. We’re spending the rest of our lives together in bed, Chrissie. Get used to the idea.” ~Alan Manzone
“We’re both in love with people who are not good for us. People we can’t be with. I think that makes us perfect together.” ~Neil Stanton
Chrissie Parker is not an ordinary college freshman. Her father, Jack, is a beloved music icon from the sixties. She was raised in a sheltered world of privilege. Then a whirl-wind spring romance with British superstar Alan Manzone rockets her into a tabloid media frenzy. Some loves prove impossible to leave behind, even at UC Berkeley, though Chrissie is determined to live a normal life as a college girl.
Just when things start getting on track for Chrissie, Alan storms back into her world, desperate to reclaim the love of the girl he should have never have let go of and cannot forget. Chrissie must also contend with Neil Stanton, a guy from her hometown who she never wanted to see again, working as a campus janitor, and as irritating and unavoidable as ever.
Chrissie fast learns what it means to be a girl of tokens and tears: the clandestine girlfriend of a famous man, and the loved friend of a guy who is perfect for her, but unable to claim her heart.
As Chrissie fights to build her own future, she is caught between the love of a friend and the love of her life.

The Girl of Diamonds and Rust
“Maybe this is love. Protecting the part of yourself most important to you and knowing when to let go so that you can keep a small piece of that person alive and real in your heart.”~~Chrissie Parker
“He will never need you the way I need you. He will never want you as I want you. He will never love you the way I love you. I don’t care if you are in love with Alan. I am in love with you.”~~Neil Stanton
“Just stay and be good to me.”~~Alan Manzone
Chrissie decides her fate by choosing the man she will marry. But which love does she pick? The love of a friend, or the great love of her life?
Does it matter the turns Chrissie takes? Or will her life be as it should? Can a woman fight her own fate? And is her perfect guy, as perfect as he seems? Does happily ever after come simply for Chrissie?
Secrets are revealed as The Half Shell universe collides with the Affair without End series in a dramatic, unexpected, emotionally intense journey of a rich girl with dark secrets finding love with a troubled rocker.

The Girl in the Comfortable Quiet “Some secrets are meant to be kept forever. What no one ever tells you is that secrets hurt you and never the ones you lie to. They are your solitary hurt and shame. The people you withhold them from go on with their lives. They live. They love. They are unharmed by your silence and the words you haven’t yet shared.” ~Chrissie Parker
“We have a perfect life together. Don’t let the past ruin it, Chrissie.” ~Neil Stanton
“We are the farthest thing from enemies, Chrissie. I will always love you.” ~Alan Manzone
Married to her gorgeous superstar husband, Neil, and living a picture-perfect life should have put the past to rest forever for Chrissie. But some mistakes you can’t escape from, the truth always comes out in time, and some loves refuse to go away.
As she starts the family she’s longed for and builds her own career as a singer-songwriter, Chrissie is confronted with more unexpected changes. Truths about her loving father, Jack. Neil’s shocking secret. Alan’s unrelenting love for her.
Caught in a web of lies, with everything she believes coming crashing down around her, will she fight to save her marriage to Neil or will she fight for the love of her life, Alan? And will Chrissie find her happy ending at last?

Download Instructions:
http://ul.to/jkyhyafd
https://intoupload.net/kyuatud0n6rl
Aug 8th, 2018, 1:31 pm
PM for dead links and/or issues with files. Include thread link else ignored.
My files have no passwords. If you come across one, use http://extract.me
Only one request per user per day.